Yesterday, burrowing through a file cabinet packed with letters, clippings, notes, and Christmas and Valentine and birthday cards – from a period when these documents could not have arrived electronically – I discovered this note from Fred Calland, sent to me at WGBH, date unknown, sometime during my incumbency as host of Morning Pro Musica. 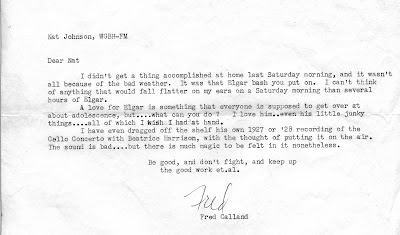 For a time, Fred was music director at our sister station at WFCR in Amherst, later he became NPR’s first music producer. More importantly, Fred was a splendid character – a real gentleman, an avid record collector and music enthusiast,  a delightful throwback to a bygone era when radio hosts were more passionate about their subject then themselves. His note to me reveals something of the Calland persona, but this commemoration NPR's Fred Calland Remembered tells much more...(click on RealMedia)
As I started this remembrance, a waterfall of partially submerged recollections began to tumble forth: An evening of listening to treasures on shellac with Fred and Diana in Amherst promoted by the famous Calland Martini – very large and very dry – guaranteed to render you seated while more and even more records were produced. “I’ll bet you’ve never heard this one...”
Here is an amusing selection of Fred Calland outtakes, assembled by his colleagues at WFCR:

Of all the Calland experiences, nothing could be more unforgettable than our ill-fated interview with tenor Roland Hayes, the first African American man to win international fame as a concert performer. Fred, having arranged the entire event, picked me up at WGBH, along with a Nagra and my tote bag filled with mike gear, and we drove to Brookline, excited by what was to be an exclusive interview with the now reclusive Roland Hayes
We arrived at a large home in Brookline; inside, the house was cool and dark and filled with a pleasant musty scent. A tall, black man, attired in what looked like formal dress, led us to the living room where Roland Hayes stood waiting for us. It is always exhilarating to come face to face to face with a legend, and even more so when you feel as though history is about to be made.
After we sat and chatted for a few minutes, Fred signaled it was time to begin. However, as I opened the Nagra and began to attach mike cables, Mr. Hayes held up his hand. “What’s this?” he asked. Fred explained this was a tape recorder we used for interviews. “No recording,” replied Mr. Hayes, in a subdued tone. So, I packed up the Nagra and the interview continued, undocumented.
On the ride home, Fred apologized for getting everyone’s hopes up, but I assured him it was no matter. After all, we had met Roland Hayes.
Fred Calland, a 'Founding Voice' of NPR
Roland Hayes" Were You There"
Posted by Nathaniel Johnson at 11:35 AM

Hello,
I really appreciate this blog very much. It was professionally written with keeping the 300B monoblock amplifier.
Thank you!
300B Monoblock Amplifier